Have Questions?
Talk to Sales

Why Use Adivaha for Amadeus API Integration ?

Amadeus GDS Integration is best fit for travel agencies and tour operators holding IATA certification and seeking for Amadeus API Integration Services. One can speak to the local Amadeus Supplier Agency to learn more about their offerings and contracting.

This WordPress Amadeus Plugin can be integrated into any WordPress theme using the process of Amadeus XML API Integration. WordPress Amadeus Plugin has a robust search engine based on Angular with real-time PNR generation and is enriched with basic marketing tools including SEO Friendly Landing Pages, Customized Confirmation Email, Real-Time Ticket Cancellation, Discount Coupon, Cashback and B2B Features. We have enumerated its features in a detailed video.

Read More Amadeus GDS Integration plays a very vital role in the travel and tourism industry and is like backbone of the travel and tourism industry. Amadeus API Integration also plays an important role in the development and growth of the industry as well as of the individuals part of it. A rough estimate suggests that it is used by over Nine thousand and fifty-two (9052) Travel agencies all over India and has extended its services to One hundred and seventy-two (172) cities of India.

Advantages of Amadeus Integration in PHP

Customers won't be redirected to any third party website for booking process.
Your customers will be able to register and manage their bookings (Cancellations) on their own from their own dashboards.

As the plugin comes with builtin checkout feature, no additional payment gateway is required.
All the payments are routed to the supplier for real time hotel booking.

Our plugin will provide you with a global inventory. With more than 190 different countries available....
your customers can view and book hotels from all over the world.

We offer multiple addons including Cash Back, Discount Coupons, Add to Favorites, etc.
They will help you to gain loyal customers as well as promote your business.

SEO stands for Search Engine Optimization; you can use this tool to improve the positioning of....
your website. Generate landing pages with targeted destinations. We provide you with google Indexable pages with optimized speed and performances.

Who doesn't want his/her site to be unique? This plugin helps you in improving your reputation....
amongst your customers and gives you an edge over your competitors by establishing you as a private brand. Our plugin can be customized using shortcodes and we’ll provide you with all the source and assistance needed to customize it to your liking.

You will have access to your customer's information like their email and phone number.
You can send them promotional emails and keep them up to date regarding any new deals.

In this modern-day and age, people tend to use their mobiles more often than their systems.
Our plugin is mobile-responsive which means that your customer will face no hassle when they’re trying to book a service through your plugin.

We provide you with a WordPress dashboard, this dashboard records all the sales that go through your plugin. This will help you in key marketing factors like positioning of your product and your demographic. You can implement changes after an analysis to maximize your profits.

We provide you with shortcodes that help you seamlessly integrate our plugin without causing any issues....
on your website. This plugin is also customizable, you can choose the color combination that suits your website. Its practical design and feature possibilities make the plugin unique.

Our plugin will send your customer an Email as soon as their payment goes through.
This email will contain important details including confirmation of payment, location of the hotel, time of payment, etc. Your customer can also use this as a voucher.

Adivaha, a Travel Portal Development Company provides you with a lifetime subscription. You don’t need to worry about any hidden costs after....
you purchase our plugin.

No Coding at All

Websites face difficulties down the road because they don’t have any technical support.
Apart from that, applications need to be updated with every technological advancement. You might end up spending more than you expected. Adivaha will not only help you with customer support we also make sure that your website keeps working with every WordPress update.

Amadeus XML Integration is a effective way to build customized travel booking application. Constantly evolving online technology means that you always need to be on the move to adapt to the market conditions. Implementing new systems can be slow and problematic while the cost of implementation and development of new products and functionalities in existing or new systems can be expensive. Amadeus GDS System offers you a cost-effective way to build and update your own customized travel booking applications. It’s easy to implement and integrate with existing systems, ensuring that you will always be at the cutting-edge of technology. Amadeus Web Services Integration uses state of the art open systems architecture and XML formatting to act entirely platform-neutral. It is totally independent of language and application framework, making implementation fast and efficient. You will be able to combine the extensive and reliable source of information provided by Amadeus with your own business logic and save time by avoiding the necessity of accessing various environments. In addition, Amadeus Website Integration Services offered by Adivha is the most comprehensive and automatic code generation in the market, which considerably reduces implementation time.

Amadeus Website Integration into your systems means that you can now invest with confidence in new software and development languages. With Amadeus XML Integration, you will no longer be locked into expensive application systems, nor will your choices be hampered by your existing platform and language. Instead, you will be free to use the most innovative and cost-effective technology in the market at next to no development and maintenance costs. The entire industry is shifting towards a more service-oriented architecture which allows you the incorporation of Web 2.0 developments. With Amadeus Web Services Integration, your agency will become versatile and fully Web 2.0 compliant, allowing you to deploy these new features to their fullest advantage and integrate any future improvements quickly and easily. If excessive server downtime is one of your main concerns, Amadeus Web Services Integration is the solution for you as it conforms to Amadeus rigorous quality standards and benefits from the highest server uptime guarantees in the market. You can count on us to support you during the development and validation phases helping you with functional and set-up support. We provide you with the highest standards of support and care. You will benefit from our streamlined solutions that maximize efficiency, rather than patch existing systems.

Discover Amadeus WordPress Plugin and connect to the flight search, flight booking, confirmation and destination content APIs that power the biggest names in travel. Adivaha Amadeus GDS Integration Services enables customers to search and book flights through API of GDS Amadeus. The company stands out from its competitors, offering 100% flexibility in WordPress plugin. 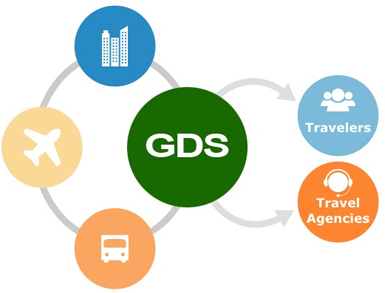 Why Use Adivaha for Amadeus GDS Integration ?

Amadeus is a global distribution system, or Amadeus GDS for short is a network that allows transactions to occur between service providers in the travel industry. They are primarily used by travel agencies, in order to gain real-time access to inventories and to book hotel rooms, airline tickets, car rentals and other travel products for their customers. It is one of the major GDS systems and was originally created by the Air France, Lufthansa, Iberia and SAS airlines as a European-based alternative to Sabre, which is a similar GDS system based in the United States. It was founded in 1987 and while it initially focused on connecting end-users with airline inventories, it has since grown to offer access to other travel services, including hotel rooms and car rental services. Amadeus GDS Integration helps by giving you 24-hour access to flight inventories.

Amadeus is the largest GDS system and accounts for almost 40% of the total bookings in the travel industry. Amadeus GDS API Integration will provide you with a platform that is currently being successfully used by almost 90,000 travel companies. You will attach yourself to a world-renowned brand that is enriching businesses on a daily basis. Amadeus Flights Module of Adivaha enables customers to search and book accommodations through API of GDS Amadeus. The company stands out from its competitors, offering 100% flexibility in Amadeus GDS Integration.

Adivaha is a travel solutions agency that will tend to all your Amadeus GDS XML Integration needs. We, unlike other agencies, believe is forming a bond with our customers. We take time to analyze your business model to provide you with solutions that are innovative and cost-effective. We deliver inclusive travel website solutions as well as more proficient travel portal software for tours and travel industry. Choosing a global leader like Amadeus and taking our Amadeus GDS Integration services will propel your business to the next level. Our customer-focused advanced technology solutions that optimize the travel agent's needs.